International modernism near to our hotel in the centre of Palma 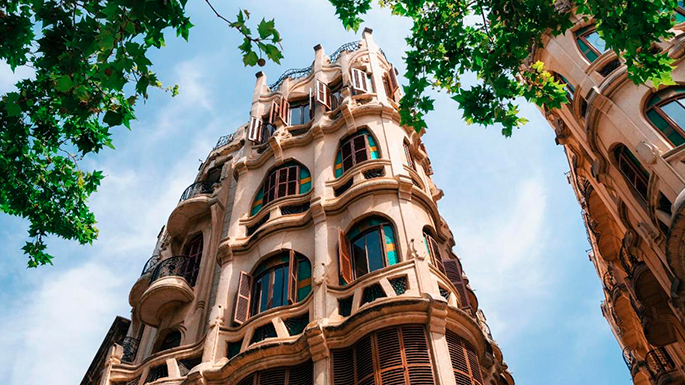 The weather isn’t the only thing that makes Palma de Mallorca a unique place in paradise. Just a simple walk though the centre of the city is enough to make you realise the grand treasures of the capital which you will find with every turn of the head. Modernism, the artistic style which characterises our friends at the Lluna Aqua by Unusual Hotels in Sóller, is one of the wonders which Palma hides within it. Architects from this time such as Lluís Domènech i Montaner, Antoni Gaudí and Joan Rubió i Bellver left their modernist print on this Mallorcan city in its international splendour. Would you like to know about some of the best modernist works near to our hotel in the centre of Palma? Keep reading to find out all the details.

International and local architects, creating gems in the form of buildings

The projects funded by the Mallorcan bourgeoisie during the end of the 19th century and the start of the 20th not only requested Catalonian workers, but also local architects such as Gaspar Bennàssar, Jaume Alenyar and Francesc Roca. The Almacenes l’Águila, the building located in the plaza del Marquès del Palmer, stands out for its use of iron in its structure and its large windows which mirror its exterior. This work of art was the result of the synergy between Gaspar Bennàssar who project managed the building in 1908 and Jaume Alenyar, who signed beforehand. It is greatly influenced by Vienesse Modernism and stands on a total of four floors decorated and reigned by its balconies and floor motifs.

The Gran Hotel and the Casasayas buidings and la Pensión Menorquina, near to our hotel in the centre of Palma de Mallorca

Another of Palma’s great and well know modernist buildings is, in fact, a cultural centre. We’re talking about the Gran Hotel, in the plaza Weyler, a pioneering building in its style in the Mallorcan capital built in 1903 by Lluís Domènech i Montaner and which is currently the headquarters for the La Caixa Foundation which is a museum. During its early years it functioned as a hotel and its recognition was remarkable thanks to its lift, steam heating and electrical system, which was extremely innovative for its time. Directly in front is where you will find the Casasayas building and the Pension Menorquina, twin buildings built between 1908 and 1911 and have been deemed Assets of Cultural Interest.

The Casa Forteza Rey is an iconic symbol of Palma located next to the Plaza Mayor. Its number one on the Calle Colón and rises up five floors where the polychrome ceramics shine of the Mallorcan factory “La Roqueta”.

Finally, at the Brondo Architect Hotel, your hotel in the centre of Palma, we want to highlight Can Corbella, a beauty located next to the Plaza de Cort, where you will find the town hall. A building with Neo-Mudéjar style, with a pre-modernist flow, an impressive wooden façade where the horseshoe arches with stained glass windows and lobed decoration stand out.

Reserve your room at our hotel in Palma de Mallorca

If you would like to discover all the modernist corners, we invite you to use our hotel in the centre of Palma de Mallorca as yourt starting point. Art has never been so alive as it is in the streets of the Mallorcan capital and with just a few steps from the Brondo Architect Hotel you will spot more than one internationally renowned beauty. Do you have a query? Do you want to reserve a room at our hotel? You can do so by contacting us via telephone on +34 971 72 05 07 or by sending an email to booking@brondoa.com. We want you to take home a modernist and unusual memory. Come to the centre.

Reserve with us this month and enjoy a
14% discount on any of your bookings.

This website uses cookies to improve your experience. We'll assume you're ok with this, but you can opt-out if you wish.